Váci 33 Office Building is located on the Váci út office corridor. Due to its high technical standards and the flexible layout, Váci 33 will occupy an important place in the office market of Budapest. The nine storey building provides 17,381 square meters of category „A” office space. The office floors can be divided into five independent units. The ground floor provides well exposed space for retail and restaurant. 3 underground levels accommodate 382 parking places for cars. A car wash and visitor parking will be available on -1 level. Váci 33 is an easily identifiable building with its number „3” shape, which facilitates the creation of easily dividable space, the colored glass facade and the green private garden at the front. Váci 33 provides the highest quality office space for local and international companies. The building is designed to meet the most stringent European standards. VÁCI ÚT CORRIDOR At the turn of this century the “Váci út corridor” became well known in business circles. It refers to the large number of modern office buildings that have been built since the beginning of the 1990’s in a former industrial area. Today the Váci út Corridor has become the largest business district in Budapest offering approximately 300,000 square metre of Category “A” office spaces. CLOSE TO DOWNTOWN Váci 33 can easily be reached from downtown, both by car and public transport. The largest banks, government institutions and the downtown business district are only a short distance away. SHOPPING AND RELAXATION The largest shopping center of Budapest, Westend City Center is only two stops away by metro, and the biggest fresh food market is only one stop away. On Nyugati tér and the inner ring road there is an abundance of nice restaurants and places to relax. HOTEL AND CONFERENCE Right next to the office building there is a 322-room, 3-star Hotel Ibis. By underground the well-known large hotels of downtown are all easily reachable. Among these hotels there are many offering complete conference facilities. 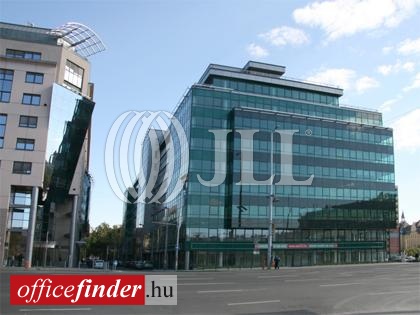